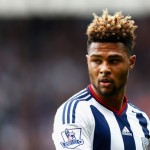 Reports are out claiming that Arsenal boss Arsene Wenger could recall Serge Gnabry from his loan with West Brom.

The winger has played only 12 minutes of Premier League football since his switch to the Hawthorns.

His deal with the Baggies will be discussed by the two clubs later this year, says the Telegraph, and could be cut short in January.

Tony Pulis the 20-year-old was not “at that level to play games” earlier this week.