Reports are out claiming that Arsenal boss Arsene Wenger is unsure over Jack Wilshere’s latest battle with injury. 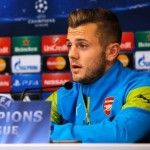 The England international midfielder has been out since November after damaging his ankle ligaments in the 2-1 defeat to Manchester United.

“We have to monitor him daily. I don’t know when he’ll return,” Wenger said.