Reports are out claiming that Arsenal legend Emmanuel Petit is urging Arsene Wenger to consider a football director’s role. 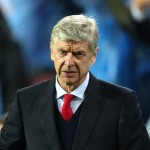 The World Cup winner was signed by his fellow Frenchman while still a teenager at Monaco and then went on to lift the Premier League and FA Cup under his mentor in 1998.

“I am pretty sure he has to stay at the club but maybe it’s time for him to open the door for something else as well. When I look at the former players from Arsenal, how many of them have their badges to manage a team?”

“Dennis Bergkamp, Tony Adams, Patrick Vieira, many, many great players, they have their own statue in front of the stadium. I think Arsene… it’s good to share the place with someone else and try to open the door to the former players,” Petit told the Daily Mail.

“I think Arsene has done a great job in the 20 years he has been there and I respect this very highly, but when you look at the title they won it was because they had great leaders in the team.

“They have great players but they are missing leaders and personality. If you want to win things, then you need to suffer.”