Reports are out claiming that Theo Walcott was reveling in Arsenal’s five-star performance against Aston Villa on Sunday. 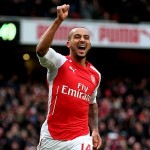 A rampant Gunners outfit demoralized Villa at the Emirates Stadium with a 5-0 victory which has them teetering on the edge of a top-four position.

Arsene Wenger’s side scored four times in the second half to condemn Paul Lambert’s team to a third defeat on the trot, which extended their winless run to seven matches, and Walcott was absolutely delighted with how the north Londoners performed, especially in the second lot of 45 minutes.

“In the first half we were cautious, they came at us and pressurised us,” he told Sky Sports 1.

“One-nil was a deserved lead at half-time but it was one-sided in the second half it was a great victory.

“It’s always nice to get goals especially at the Emirates, and the finish was great, but it is all about three points.

“Everyone, the whole crowd is buzzing that happens when a team is at the top of their game.”

Olivier Giroud opened the scoring for the Gunners in the 8th minute when getting on the end of a delicious flick from Mesut Ozil before taking four touches while advancing into the area and then producing a deft chip to evade Villa’s Brad Guzan.

Giroud then became the provider in the 56th minute when playing a neat ball into space for Ozil down the left which allowed the German to settle before angling his effort across a hapless Guzan.

Walcott, starting for the first time in the Premier League in over a year, made it 3-0 in the 63rd minute with a superb team goal which involved Santi Cazorla and ended with the England winger curling home from the edge of area.

The onslaught continued with 15 minutes remaining when teenage striker Chuba Akpom, in just his second league appearance of the season, was up-ended by Guzan in the area.

Cazorla stepped up to the spot and hit his 12-yard effort straight into the left palm of the American keeper who was unable to keep the ball out of the back of the net before Hector Bellerin wrapped it up in injury-time with first senior Arsenal goal courtesy of a lovely low finish from outside the area. Arsene Wenger Adamant Arsenal Will Not Panic Buy In January