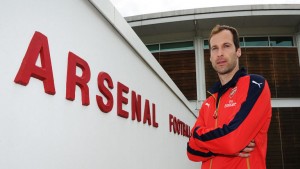 The Gunners new goalie believes the club will challenge for the title next season after they “showed potential” with back-to-back FA Cup final wins and it was one of the reasons why he chose to join the club.

The goalkeeper signed a four-year deal with Arsene Wenger’s team this week to end an 11-year association with Chelsea as he made a £10m move across London.

Cech was keen to remain in the capital with his family settled after so long in England but the Czech Republic international insists football reasons were behind his decision to move to the Emirates.

“I wanted to choose the best option for myself in a football way and Arsenal showed me they really wanted me to join,” he told Sky Sports News HQ.

“I spoke to Arsene Wenger and he presented me with a project I believe I want to be part of. Obviously it is a new challenge for me.

“The football reason is the main reason I chose to join because I believe the Premier League is the best league in the world.

“Once I got the offer from the Premier League and from a team who will challenge for titles and try to improve in the Champions League and try to win everything, it matched my personal motivation.

“Having won two FA Cups, it’s a first step and clearly shows the team has the potential to win trophies. Last season, the run Arsenal had in the Premier League from the start of the new year was absolutely brilliant.

“The start of the season was difficult for them and that’s why, in the end, they missed a little bit on challenging for the title.