Reports are out claiming that Arsenal defender Per Mertesacker feels their title hopes are on the line against Tottenham on Sunday. 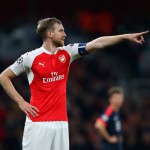 The German defender gave a damning assessment of the humiliating defeat at Bayern Munich and claimed Arsenal “played without courage.”

He said: “We will learn a lot from this game, we must learn a lot and we have to play better against Tottenham.

“We need to switch on, put away negative energy and fight back. But if we are to beat Tottenham then we have to recover quickly.

“We have played well recently, defended well and that’s what we must focus on. We must remember those games, try to move on from this performance and focus on beating Tottenham. We have to analyse quickly and get players back quickly.”