Reports are out claiming that Arsenal captain Mikel Arteta is convinced by the blend of Arsene Wenger’s squad. 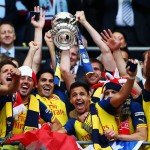 Hector Bellerin and Francis Coquelin established themselves as first-team regulars as the Gunners also secured automatic Champions League qualification and Arteta is confident that the spirit around the club will help Arsenal achieve even more in the future.

The Spaniard told Arsenal Player : “The development of this group in the last three or four years has been magnificent,”.

“That’s not up to me, it’s up to all the players and all the effort from the staff and everyone involved at the club. So I’m very pleased with what we’ve got.

“I’m not a captain that likes to do everything by himself. We’ve got players and characters here that are very good for the group and I keep them involved all the time. It’s not about my ideas or my beliefs, it’s about getting a taste of what players need.

“They are different ages and different cultures and they come in at different times as well. [With] processes that we go through during the season, I get a lot of help from the lads.”