It has been revealed that Arsenal captain Mikel Arteta says they’re looking forward to tomorrow’s derby with Tottenham. 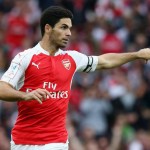 The Spanish midfielder has played in several high-profile derbies throughout his career, including the Old Firm and Merseyside contests, but is reluctant to compare the emotional encounters.

“You ask Arsenal or Tottenham supporters, it’s the best in the world.

“You are Rangers or Celtic fans, their derby is the best,” he told The Gooner fanzine.

“It’s how you feel, it’s how this has been developed through your life since you were a child and how emotional it gets for you.”

Theo Walcott On The Brink Of Arsenal Return