It has been reported that Arsenal captain Mikel Arteta is a big fan of Hector Bellerin. 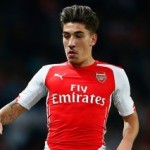 The Spanish teenager is held in high regard at the Emirates.

“He can be the right back of Arsenal for many years in my opinion, provided he gets the chance. Mentally, he handles what is requested to play at the highest level. He’s got pace, he’s got technique and he’s a very positive guy.

“I talk to Hector a lot. He’s been around for years and we’ve been talking to each other for a long time. I know him well because he’s taken part in pre-season a few times with us already.

“He’s a very confident guy and we treat him as any other player because he’s part of our squad. Hopefully he’s going to become a top player at the club.”