Arsene Wenger has admitted that Arsenal were not at the races for their 2-2 draw with Southampton. 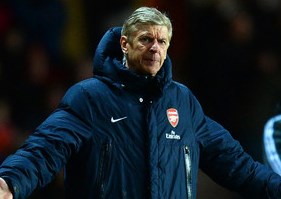 The Gunners were thoroughly outplayed in the first half as Jose Fonte’s 21st-minute header gave Saints a well-deserved lead at the break.

Two quick-fire goals after the interval, with in-form duo Olivier Giroud and Santi Cazorla once again on target, gave the visitors a lead to defend before Adam Lallana pulled Southampton level and Mathieu Flamini saw red late on.

The Frenchman said : “I think in the first-half Southampton played very well and we didn’t play well,”.

“Southampton deserved the lead at half-time and in the second-half I felt we played well and it was a very good football game.

“You want the three points in every game but it is a difficult place Southampton. When you look at the overall record it can happen sometimes away from home you take only one point.” Robin Van Persie : We Got A Bit Lucky!