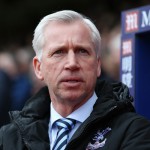 Pardew is in no doubt where Arsenal’s weakness, saying: “It is so much more difficult to get pressure on those two centre-halves when they’re playing at home.

“But we are going to try and will put pressure on their centre-halves every opportunity we have.

“I think it’s documented that their set-piece record isn’t great defensively and we are the best.”