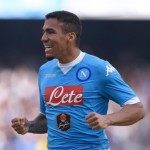 Reports have emerged claiming that Arsenal have joined the interest for Napoli attacker Allan.

El Mundo Deportivo claims that Arsenal are rivaling Chelsea for Allan ahead of the summer market.

The attacker is tied to Napoli until 2019.

Agent Claudio Vagheggi said: “He’s an extraordinary player, has had his ups and downs but his contribution is always important.” Wenger : Van Persie Could Be Back In April