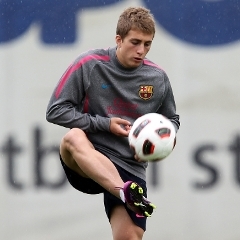 The Daily Star reported that the Gunners have set their sights on the new Cesc – Barcelona youngster Deulofeu.

Cesc Fabregas joined Arsenal as a 16-year-old and went on the become the Gunners captain before rejoining the Spanish giants this summer.

Arsenal boss Arsene Wenger is desperate to land Gerard Deulofeu – who is being compared to striker Lionel Messi – before he turns 18 next year.

Players in La Liga are only allowed to sign professional contacts at 18 – which means the Gunners can sign Deulofeu for just £3m.