Reports are out claiming that Borussia Dortmund’s Greek defender Sokratis Papastathopoulos is a £12 million target for Arsenal. 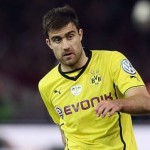 The Mirror reported that the 26-year-old centre half has been offered to the Gunners and they are trying to negotiate a cut-price deal, as Dortmund want £20m for him.

It is said that Arsenal boss Wenger is desperate for a defender after selling Thomas Vermaelen to Barcelona for £15m as he needs cover at centre-half.

Papastathopoulos – commonly known as Sokratis – is surplus to requirements at Dortmund, where Neven Subotic and Mats Hummels are the first-choice centre-backs, and the deal could get the green light.