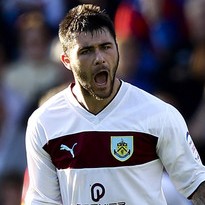 Interesting transfer news are out claiming that Burnley striker Charlie Austin is a shock target for England’s biggest clubs.

The Daily Mail reported that Arsenal have joined the list of clubs monitoring Austin at Burnley.

The 20-goal striker has been watched by an increasing number of Premier League scouts over the past five games as they assess his ability to make the step up.

Newcastle United have a long-held interest while Liverpool, Everton, Reading and Aston Villa have also taken a look at Europe’s top scorer. Arsenal Go Back On Merchandise Code With Three Kits Per Year