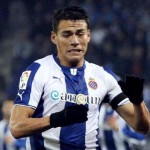 Reports are out claiming that Arsenal are eyeing Espanyol defender Hector Moreno.

The Daily Mail says Arsenal scout Brian McDermott was at Espanyol against Valencia on Tuesday evening as he ran the rule over Moreno.

The 26-year-old Mexico international has been a target for Tottenham, Swansea, Everton and Hull in recent seasons.

However it is thought Arsenal manager Arsene Wenger is keen to sign the 57 time capped centre back to bolster his defence.

Wenger looks set to be active in the January transfer window, especially after Mathieu Debuchy dislocated his shoulder at the weekend against Stoke. Arsenal are getting tougher – Wenger