It has been reported that Arsenal are chasing Porto striker Jackson Martinez. 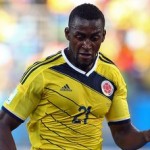 The Daily Star claims that Martinez has enjoyed a sensational couple of seasons with Porto, netting 60 goals in 89 starts for the Portuguese giants since joining the club in 2012.

That stunning spell has seen him linked with a host of Europe’s top sides, and now reports suggest Arsenal are ready to splash the cash to land the Columbian.

He has impressed at the World Cup as Columbia booked their place in the knockout stages with a 100 per cent record. Arsenal’s Mertesacker Insists Opposition Will Be Scared Of Theo Walcott