Reports are out claiming that Arsenal are keeping tabs on Feyenoord defender Daryl Janmaat. 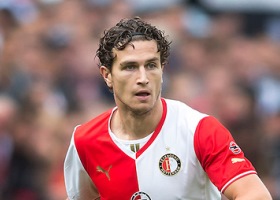 The Daily Express reported that the 24-year-old’s deal expiring in 2015, Feyenoord would ideally like to tie the player to a new long-term deal.

But Janmaat is resisting accepting the offer until he finds out whether Arsenal will step up their interest in him at the end of the season.

He would arrive as a replacement for Bacary Sagna, who comes off contract in June.