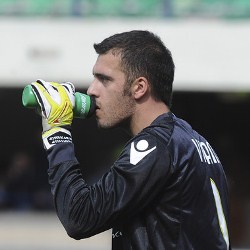 Interesting transfer news are out and it has been reported that Arsenal are interested in signing new Inter Milan goalkeeper Emiliano Viviano.

According to The Sun the 25 year old Italian international is an £8million target for Arsenal.

It is said that Gunners boss Arsene Wenger will make his move as soon as he finally offloads Emirates misfit Manuel Almunia.

Inter have only just paid Bologna £3.8m to acquire the full rights for Viviano, 25, who had been co-owned by the two clubs.

But the 6ft 5in Italian would welcome a move to Arsenal to battle Wojcech Szczesny for the No 1 spot rather than be Julio Cesar’s understudy at the San Siro.