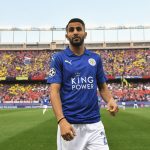 Sport claims that Mahrez has given up hope of landing a dream move to Barcelona and now favours the Gunners, with a four-year deal at the Emirates believed to be on the table.

Mahrez has been linked with a move to Arsenal in the past, but signed a new four year deal at the King Power Stadium in August.

The 26-year-old was named PFA Player of the Year in 2016, after playing a key role in Leicester’s shock Premier League title win.

He announced earlier this month that he wanted to leave the Foxes this summer.