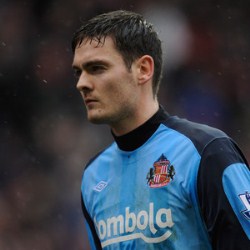 Transfer news from the Premier League is out and it has been revealed that Arsene Wenger is interested in Sunderland goalkeeper Craig Gordon.

The Sunday Sun has reported that the Scotland international goalkeeper is about to enter the final 12 months of his current five-year deal.

However it is said that Gordon has been told to forget about contract talks until he has made a full recovery from knee surgery.

Sunderland’s stance has alerted Arsenal, who have a long-standing interest in Gordon and are looking to bring in an established first-choice keeper after another season of costly goalkeeping calamities from Manuel Almunia and youngster Wojciech Szczesny.

Wenger is expected to spend this summer to strengthen his squad after their trophy drought continued for a sixth year, and a goalkeeper will rank high on his shopping list. Andrey Arshavin Denies Being Put Up For Sale By Arsenal