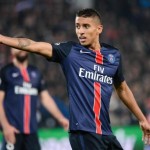 The Daily Express says United are set to lead a three-way battle for PSG defender Marquinhos this summer.

The Brazilian is frustrated with a lack of playing time and despite being contracted until 2019, is reportedly ready to leave in the summer.

Arsenal and Chelsea are also keen on the defender.

United are expected to move for defensive reinforcements in the summer but will have to fork out around £50m for Marquinhos.