Reports are out claiming that Chelsea and Arsenal are chasing Sion striker Moussa Konate. 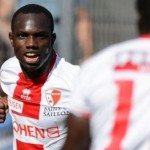 The People reported that the 22-year-old, who plays for Swiss club Sion and is rated at £10million, hit five goals at the London 2012 Olympics and Tottenham, West Ham and Everton are also interested.

Konate joined Sion from Russian side Krasnodar last year and has also played for Genoa in Italy and Israel’s Maccabi Tel Aviv. He has won 10 caps for Senegal and is under contract with Sion until 2018.

Agent Antoine Issa Kossoko said: “Lots of English clubs are interested in Moussa – Chelsea and Arsenal scouts are keeping an eye on him – but he is not obsessed with the Premier League and will consider good offers from Germany, Spain or England.

“Hannover, Mainz and Bruges were keen on him this summer, offering up to £6m. But Sion said they would not sell for less than £10m.”