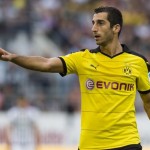 Reports are out claiming that Chelsea’s chances of signing Henrikh Mkhitaryan have been handed a boost, according to reports.

The Daily Mirror is reporting that the attacking midfielder has asked for a buyout clause to be included in the new contract that was recently being negotiated.

Mkhitaryan, 27, is out of contact at the Westfalenstadion in the summer of 2017 and has refused to sign a deal that does not include a release fee but the Bundesliga giants are not keen for that to occur having lost Mario Gotze to rivals Bayern Munich in similar fashion three years ago.

If they do not meet his demands, Dortmund risk losing the Armenia international for free at the end of next season or may be forced to sell this summer as the likes of Chelsea and Arsenal continue to show interest.

The Blues are believed to be serious about their pursuit of Mkhitaryan which is looking a little more positive now that talks between the player and his current club have stalled.

Mkhitaryan has netted 18 goals in all competitions for the DFB Pokal (German Cup) finalists this season. Per Mertesacker Pleased By Arsenal Progress In 2015