It has been revealed that Chelsea and Arsenal are watching Olympique Marseille defender Nicolas Nkoulou’s situation. 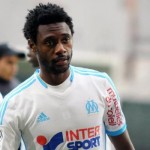 The Cameroon international is inside the final year of his current OM contract.

Though off contract in June, Marseille could seek to sell in January with the club hard up for cash.

A source revealed: “Chelsea would have an eye on him. Arsenal too. Much less prestigious squads also. These clubs know his potential.”