Reports have emerged claiming that AC Milan are in contact with PSG attacker Ezequiel Lavezzi. 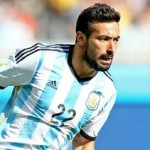 It is said that the Italian giants are moving for the Argentine international after being frustrated in their pursuit of Hellas Verona ace Juan Manuel Iturbe, who is in talks with Juventus.

Sportitalia reported that Lavezzi is currently discussing a new deal with PSG. However, he is aware of Milan’s interest and not ruling out a return to Italy.

The former Napoli star has also been linked with a move to the Premier League with Arsenal and Chelsea.