Reports are out claiming that Arsenal and Chelsea are both on red alert following news that Inter Milan could get rid of Gabriel Barbosa. 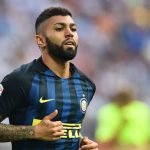 The prolific Brazilian striker, dubbed ‘Gabigol’ for his exploits at Santos, joined Inter in a £26million deal in the summer but has appeared just once for the Italian side.

Calcionews24 is reporting that the Nerazzurri are pondering whether or not to offload the 20-year-old in January which has the Gunners and Blues waiting in the wings.

However, Barcelona will provide strong competition to the Premier League duo as it is understood that the Catalan giants had the first option to sign Barbosa from Santos, due to a clause in Neymar’s contract of 2013.

But Santos went against Barca and sold the player to Inter where he was unused by Frank De Boer prior to the Dutchman’s sacking.

With Stefano Pioli having taken over at the San Siro, Barbosa could still get his chance to prove himself before the January transfer window opens.