Interesting transfer news are out claiming that Premier League giants are on red alert over the availability of Anzhi star Samuel Eto’o. 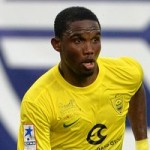 The London Evening Standard reported that Russian giants Anzhi Makhachkala announced that many of their star players will be sold as part of a mass clear-out.

Among those available will be Eto’o as reports in Russia suggest that billionaire owner Suleiman Kerimov is unhappy with their poor start to the new season and has decided to make wholesale changes.

Chelsea boss Jose Mourinho would love to be reunited with Eto’o, while Manchester United, Arsenal and Tottenham are also sure to make enquiries this month.