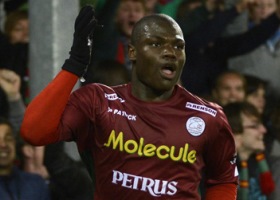 Reports are out claiming that Arsenal, Fulham, Chelsea and Everton were all represented at Belgium’s U21 clash with Italy last night.

It is said that scouts from all four Premier League clubs were in attendance in Genk to see Zulte Waregem midfielder Junior Malanda.

The Belgium U21 international is being watched extensively by Premier League scouts this season and could attract offers in January.

At Zulte-Waregem, where he is on-loan from Wolfsburg, the 19 year old plays alongside on-loan Chelsea midfielder Thorgan Hazard. REVEALED : Alexis Sanchez Unsettled At Arsenal, Falling Out With Teammates