It has been reported that Wolfsburg are referring all interested clubs to Luiz Gustavo’s buyout clause. 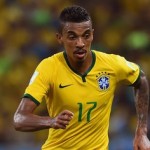 Wolfsburger Allgemeine Zeitung claims that Wolfsburg are coming under pressure from across Europe to sell the Brazil midfielder.

Chelsea, Arsenal, Manchester United, Barcelona and AS Monaco are all in contact with Wolfsburg for Gustavo.

The midfielder’s contract carries a €25 million buyout, which so far none of the quintet are prepared to meet.

Now 26, Gustavo is currently part of Brazil’s World Cup squad and entering the peak years of his career.

Louis van Gaal Expected To Be At Old Trafford Tomorrow

Arsenal Drop Out Of Race To Sign Pierre-Emerick Aubameyang