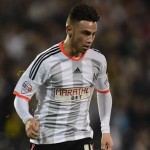 Reports are out claiming that Fulham are moving to tie down Patrick Roberts to a new deal.

Chelsea, Arsenal, Manchester United, Liverpool and Spurs are all keen on the England Under-19 international.

Roberts, 18, made his first-team debut last season, but has been restricted to just a handful of starts this term.

The winger’s current deal has just a year left to run, with the Cottagers keen to secure his long-term future.

“We will look to tie up our best young players. He’s a fantastic prospect.

“It’s a little bit early for him to play Championship football in the position we’re in.

“He’s a sensible lad. I’d be a bit worried if he didn’t want to play but he understands the situation and the predicament of the club.”