Reports are out claiming that Mauro Icardi remains a target for Arsenal. 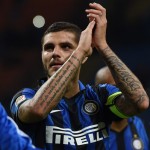 Gazzetta dello Sport claims that the Gunners are set to make a second bid for the Inter Milan striker.

It is believed that Arsenal have already had an offer of £28million turned down for 22-year-old Icardi but will return with a second proposal in January.

It is also suggested that reigning Premier League champions Chelsea are also maintaining an interest in the Argentine.