It has been reported that Arsenal and Chelsea are battling for PSG youngster Adrien Rabiot. 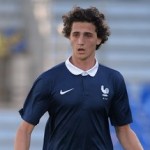 Le Parisien revealed that Laurent Blanc was determined to hold onto the starlet, but would now rather cash in after Rabiot rejected a new deal from the oil-rich club.

The midfielder now has less than a year to run on his contract.

The 19-year-old has been attracting the interests of Roma and Juventus in recent weeks, but Arsene Wenger and Jose Mourinho are leading the race for his signature, says the Daily Express.

Both managers were willing to pay as much as £10million for Rabiot, but it’s now believed that PSG have given him the green light to quit France and link up with one of the Premier League duo for a bargain fee of just £5million.

Flamini Confident Arsenal Will Be Ready For Everton Midfield Battle