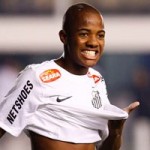 Reports have emerged claiming that a host of English clubs are monitoring the situation of Brazilian starlet Victor Andrade who currently plays for Santos.

The 17-year-old has already been labelled the new ‘Neymar’ having made his debut for the club aged just 16.

It is said that Chelsea, Arsenal and Manchester City have all been linked in previous months, whilst it is now claimed Liverpool and Newcastle have also been alerted to his possible availability.

Andrade is represented by NVA Entertainment Group in England and a spokesman confirmed to Sky Sports: “We can confirm that there is interest in England in Victor, and not unsurprisingly from some of the bigger clubs.

“Victor is a wonderful talent, but we and his family are calm and we are confident his future will be resolved at the right time, in the right way.”

Antonio Cassano Linked With A Move To Liverpool