Interesting transfer news are out claiming that clubs across Europe are monitoring Marco Verratti’s situation at PSG. 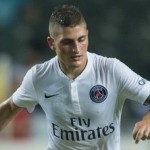 It is said that Premier League trio Arsenal, Tottenham and Chelsea have all been linked with the Italy international since the turn of the year, along with Carlo Ancelotti’s Real Madrid.

Gazzetta dello Sport claims that Verratti is unhappy with the terms of his PSG contract and feels he deserves a raise.

The midfielder’s agent has now sounded out PSG about opening talks over an improved deal. He is currently tied to PSG until 2018.

However, president Nasser Al-Khelaifi has rejected the request, much to the disappointment of Verratti’s camp.