Reports are out claiming that Roma defender Alessio Romagnoli is unsure about his future. 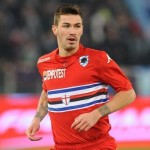 Romagnoli is a confirmed target for AC Milan.

Romagnoli was asked by fans at the training ground in Trigoria today whether he’d be staying at Roma, with LaRoma24 reporting the 20-year-old replied “we’ll see…”.

Milan chief Adriano Galliani has confirmed their €25 million offer remains on the table.

The Italian U21 international is also a target for Premier League clubs Arsenal and Chelsea.