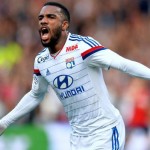 Reports are out claiming that Alexandre Lacazette has cast doubt on his future at Lyon.

The striker has been linked with Liverpool, Arsenal and Chelsea this season.

“I don’t know,” he replied when asked if he would still be at OL next season.

“That is a question that will be asked at the end of the season.

“I am very proud, it is a boyhood dream come true to win the trophy for the best player.”