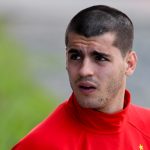 Reports are out claiming that Real Madrid signing Alvaro Morata is preparing for a move to London.

Real have re-signed Morata back from Juventus, but could immediately sell him on for a healthy profit.

The Spain international has been linked with Chelsea and Arsenal, along with a return to Juve.

Property giants, Proto, have announced they’ve been instructed to find Morata a home in London. The same firm made a similar revelation regarding imminent Manchester United signing Zlatan Ibrahimovic and a house in the Northwest.

A spokesman for Proto told calciomercato.com: “We were asked to find a buyer for the apartment Morata had bought long ago in the centre of Turin.

“Meanwhile, we can also announce that Morata is looking for a house in London. His requirements are quite restricted in contrast to other players.”