Reports are out claiming that Everton defender John Stones is reluctant to move to London. 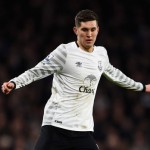 The England international would prefer to join either Manchester United or Manchester City if he leaves Everton this summer.

Chelsea had four bids for the 21-year-old rejected last summer and are expected to return with a new offer at the end of the season.

The Times says Stones would prefer to stay in the north west should he depart Goodison Park.

And while he will not totally rule out a move south or abroad, the revelation puts United and City in the driving seat to sign him.

Arsenal are also said to be interested in the talented defender.