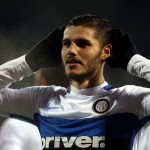 Reports are out claiming that Premier League clubs are monitoring Mauro Icardi’s situation at Inter Milan.

Tuttosport claims that Icardi will quit Inter in the summer if Roberto Mancini remains as coach.

Mancini has benched Icardi this season and the pair simply no longer get along.

Icardi’s management will now begin hawking the striker around Europe ahead of the summer market.

The Argentine has long-term admirers at Chelsea and Arsenal.

I Could Have Stayed With Chelsea – Didier Drogba