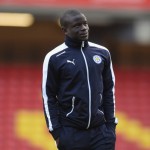 Reports are out claiming that N’Golo Kante has cast doubt on his future at Leicester City.

His impressive performances have led to reports of a big-money move and he has been linked to clubs such as Arsenal, Real Madrid, Chelsea and Juventus.

When asked if he would be at Leicester next season, Kante told Sky Sports News HQ: “I will fight for Leicester this season and next season we never know and we will see.

“At this moment I am focused on Leicester. We have to finish well this season but I don’t mind about [being linked with] the other clubs.”