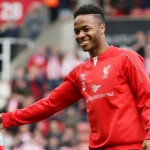 Reports are out claiming that Liverpool legend Graeme Souness has urged disgruntled star Raheem Sterling to re-consider his future at Anfield.

The 20-year old England international star has been heavily linked with a move to the likes of Chelsea, Manchester City and Arsenal after refusing to sign a new deal with the Reds.

But Souness believes Liverpool is the best place for the talented England international to develop.

He said: “He’s at a great football club. He’s a young man who’s shown promise but that’s all he is.

“He’s miles off being the finished article. The priority should be playing football and improving and hopefully becoming a proper player one day.

“All he is, is a promising talent. He’s a million miles away from being a proper player.

“He won’t go anywhere better and learn his trade. The crowd are more understanding at Anfield than at any other football ground.”