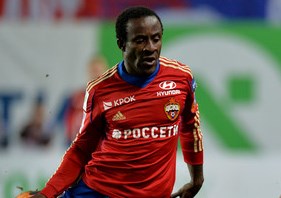 Reports are out claiming that CSKA Moscow striker Seydou Doumbia is ready to move to England this summer.

The Daily Mail revealed that the Ivory Coast striker has scored 16 goals in 18 games for CSKA Moscow this season and is once again attracting keen interest across Europe with his agent Jean Bernard Beytrison sounding out potential clubs.

Chelsea and Arsenal are among his admirers. They have monitored his scoring exploits over recent seasons but CSKA’s variable valuations ranging from £15m to £30m have put them off negotiations.