Santos starlet Victor Andrade has admitted that he is attracted by the Premier League.

According to the Sunday Mirror, Arsenal, Chelsea and ­Manchester City are all aware of the talents of 17-year-old Andrade who is already a first team regular at Santos. 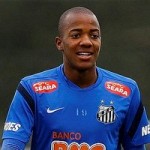 The youngster’s contract runs out at the end of the season and he has made it clear that he will not sign a new deal. That makes him available at a bargain price of less than £2.5 million – the development fee Santos will receive.

“Quite simply, I would love to play in Europe,” Andrade told the Sunday Mirror.

“My godfather Robinho has told me of the great experiences he had at Real Madrid, Manchester City and AC Milan. He told me how it made him a better player because playing in Europe means you must adapt to different styles and systems.

“I think it will be a great education for me. Everybody around the world knows about the strength of the Premier League.

“And many Brazilian players have done well when they have played in England. Players like David Luiz and Oscar at Chelsea and now Paulinho has gone to Tottenham to play alongside Sandro.

“It is a very exciting prospect for me. My dream is to play for Brazil in the World Cup and I believe that moving to Europe will help me because it will help my all-round game.

“I have no problem with Santos. They have helped me a lot. But I think the time is right for me to experience a change.”