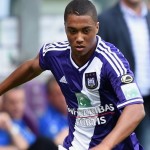 Reports are out claiming that Anderlecht whizkid Youri Tielemans insists he won’t push for a move this summer.

The 18 year-old Belgian has been watched by the likes of Manchester City, Chelsea and Arsenal this season.

But Tielemans says: “I will play next season for sure with Anderlecht, why not?

The youngster is regarded among the best players for his age in the world. Arsenal Set To Miss Out On Lukas Podolski