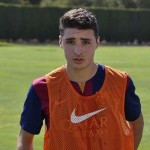 The People reported that Arsenal and Chelsea are battling for the signature of Ruiz, who is only 16.

Barca are battling to convince Ruiz to continue his football education at La Masia.

Arsenal scout Francis Cagigao is a regular at youth team games in Spain and the Gunners have been successful in tempting players such as Cesc Fabregas, Jon Toral and Hector Bellerin to north London in the past. This time, however, they face competition.

Both Arsenal and Chelsea have spoken with the player’s family while Barcelona are keen to offer a contract, too.

Alex Oxlade-Chamberlain : Man Utd Defeat Can Only Make Us Stronger!