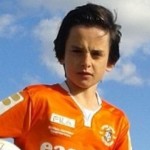 It has been reported that A trio of Premier League clubs are set to undergo a mad scramble to sign an 11-year old English boy.

Charlie Patino, of Luton Town’s academy, is a target for Arsenal, Chelsea and Tottenham according to the Daily Mail.

The midfielder, who analyses Spanish football in his spare time, is wanted by the Gunners who took Jack Wilshre from Luton to their Hale end academy when he was nine.

Patino’s father Julio says his son is well aware of the interest, especially after the family visited the training grounds of all three London clubs, and is determined to make it to the very top.

“We just want what’s best for Charlie, to give him the best chance of being a professional footballer if that is what he wants to do,” Julio Patino told Sportsmail.

“He is a dedicated boy, he works hard at school, gets good grades and is committed to playing football. He just loves it.

“Charlie is only 11 but he gets it and he knows what is happening to him. He knows that this is a big opportunity to train with a top club, even though there are no guarantees at the end of it.”