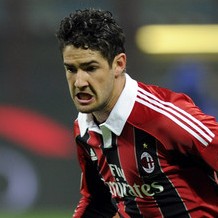 It has been reported that the future of AC Milan striker Alexandre Pato will be discussed in the next 48 hours.

The 23 year old dropped the bombshell last week that he was unhappy with his limited role at Milan this season and warned agent Gilmar Veloz would be seeking talks with club officials.

TMW says Veloz will meet with Milan directors either tomorrow or Thursday to discuss the situation, with Premier League clubs monitoring events closely.

Arsenal boss Arsene Wenger made serious enquiries after Pato during the summer market, while Chelsea and Manchester City have also been linked with the Brazilian.

It was less than 12 months ago that Pato turned down a move to PSG after Milan had accepted an offer from the French mega spenders.