Reports are out claiming that Arsenal chiefs have assured Arsene Wenger they’ll whatever it takes to land Real Madrid striker Karim Benzema. 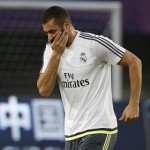 The Mail on Sunday reported that the Gunners are also willing to eclipse Mesut Ozil’s £150,000-a-week wages to convince the Frenchman.

Wenger is desperate to land Benzema this summer, believing the Real Madrid striker is the final piece in the jigsaw that would turn his side into genuine title contenders.

And the Gunners are prepared to break their financial records to make the deal happen.

They are willing to pay over the £42.5million they paid for Ozil in 2013 and will make Benzema the club’s top earner.