Reports are out claiming that Arsenal chiefs are baffled by talk of Mesut Ozil being tempted away. 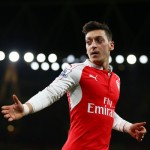 The Sunday Mirror reported that Arsenal are bemused by claims that Ozil wants to leave the club.

An Arsenal insider pointed out there have been no detailed talks between Ozil and the club about a new contract to extend a deal that still has two and half years to run.

As a result, Arsenal are confident a new agreement can be reached with Ozil. Arsene Wenger Delighted With The Performance Of Jack Wilshere